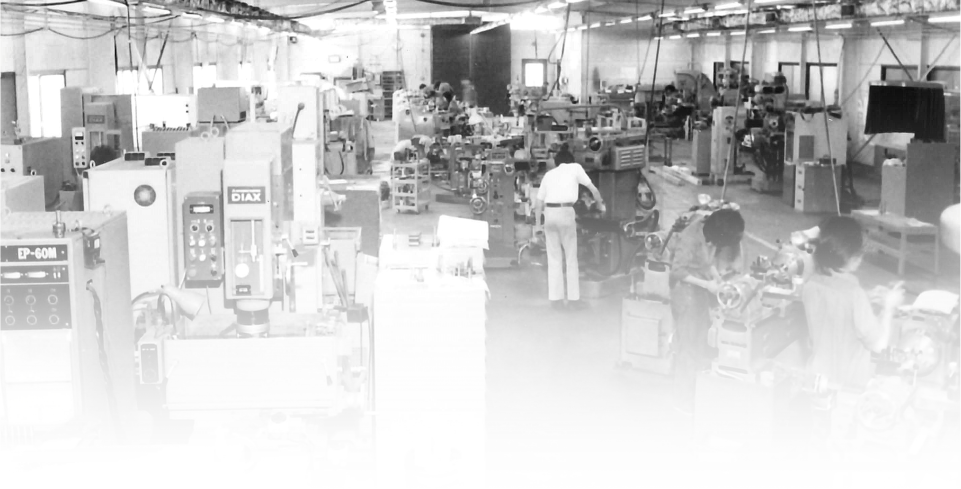 In 1959, a venture company, “Tanaka Alloy Works” was founded with its slate roof office building located near “Temma Station” of Osaka Loop Line. In its 9.5-square-meter room with a wooden floor, the venture company developed its “carbide die processing technology using deformed wire” that was powered by its original electric discharge machine modified from a drill press. This is the beginning of the NICHIDAI’s history.
Having made its way into the area of “cold forging die” thereafter, the company has established its sound status in the automotive industry as motorization progressed and has grown as a global company with a top-class share in the global market.
Our greatest strength is an inquiring mind and a relentless spirit of pursuit for the improvement of our technologies inherited since the company’s foundation. This page introduces the history of the innovation the NICHIDAI persons have made to accomplish their business philosophy, “creation of new values”, by exercising the NICHIDAI spirit.

The foundation spirit of NICHIDAI 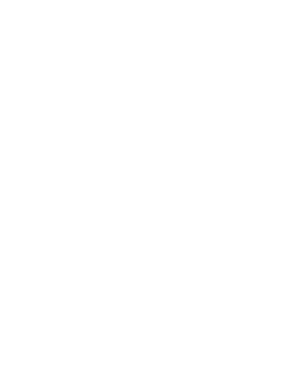 In August 1988, NICHIDAI’s Ujitawara Factory opened. With an area of 20 times as large as Kyotanabe Factory which had been the company’s main production site, this factory carried the weight of expectations as a base ground for the promotion of “diversity” and “sophistication” the company aims at. In the mid-1980s, Japan became a country with high labor costs through rapid yen’s ascent and required the speedy adoption of high-techs and software technologies into its corporate culture as many manufacturers in the country faced their turning point. In such a trend, the new factory tackled various challenges to convert the company from a mere manufacturer to a “technical service company”.
The symbol of that conversion was “HED-800”, a hydraulic double-acting press for development the company introduced by a vast amount of unprecedented investment for die manufacturers of those days. This drastic innovation brought the company its unique forging technology which subsequently developed. For example, the company’s proprietary “enclosed forging die set” was also successfully commercialized by the application of “HED-800”.
For the development of this product, the company adopted an unconventional way where its engineers competed against each other with their ideas. As a result, one of those engineers came up with a breakthrough idea called “pantograph system”. Afterwards, those engineers who used to be rivals cooperated to put together the power of NICHIDAI for the commercialization of the system. The development of this system resulted in the rapid diffusion of cored forging into the market, which drove the shape variation of bevel gears and products.
The development of a company’s representative product, “scrolled forging” could not have been achieved without “HED-800”. NICHIDAI embarked on the development of forged scrolled parts as an alternative construction method to solve problems in forging manufactured by conventional methods. “HED-800” played a key role in the development of forging method with back pressure load as an important factor in production and created the optimum shaping conditions after much trial and error. The company also survived the birth pangs in the establishment of production and die-making technologies for mass production as well as in lubrication problems and succeeded in the adoption of forging process through the highly productive mechanical press that is still used today and the construction of a seamless manufacturing line.
This inquisitive mind and team dynamics for new technologies represent the core of the NICHIDAI’s technological competence which subsequently has generated a wide range of unique technologies driving the industry through collaborations with its customers. 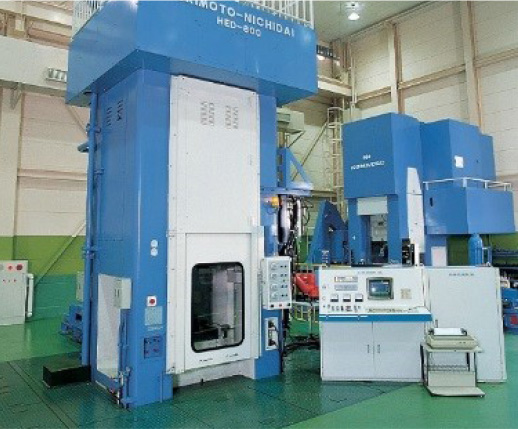 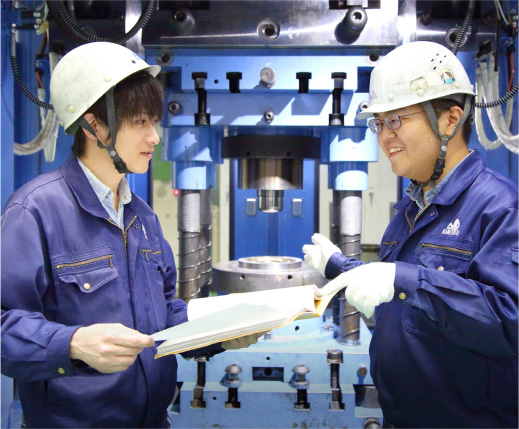 ▲In 2017, “HED-800” became obsolete and was replaced with a next generation machine, “NFD-1000”. The company’s strong passion for “keeping its top position in the industry” has also been inherited to the new machine.

In 1989, NICHIDAI started its overseas operations for the first time. In April of that year, the company founded a production plant for precision forging in Fort Wayne, USA (ND-TECH, capitalized at 1.5 million USD) on the basis of its die-making technology it had developed for a long time.
While this first overseas plant ended up its pull-out several years later, NICHIDAI founded NAC (NICHIDAI AMERICA CORPORATION) in Kentucky as its second attempt to enter the American market in 2002. In this second attempt, the company counted on its best product, “precision forging die”. With its passion of “spreading the best technology of Japan into the world automobile center, USA”, NICHIDAI overcame a lot of obstacles after much trial and error. When its business was almost put on track several years later, however, Lehman Brothers went bankrupt. Its business got in a serious predicament that forced the company out of the US market again leaving its sales site, NUC (NICHIDAI U.S.A.CORPORATION).
However, the NICHIDAI’s passion for overseas markets did not fade away. The company founded TSM (THAI SINTERED MESH CO., LTD.) in Thailand in 2007 just before the bankruptcy of Lehman Brothers to start the production of metal filters. In 2008, it also founded NDT (NICHIDAI (THAILAND) LTD.) as the overseas base for its assembly business to expand the business for automobile manufacturers of the world. In addition, for the global development of the NICHIDAI’s die business, NDT started the production of scrolled forging and dies in 2012 and 2013 respectively. The infrastructure development for a leap to the world market is still now under development in Thailand. 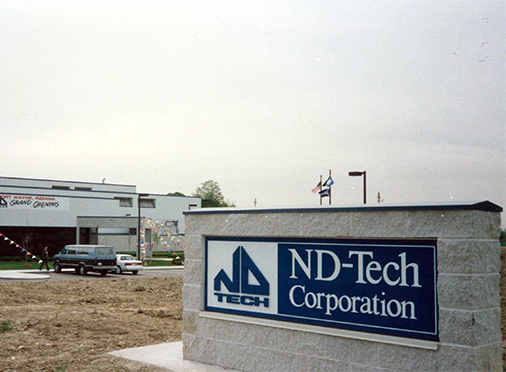 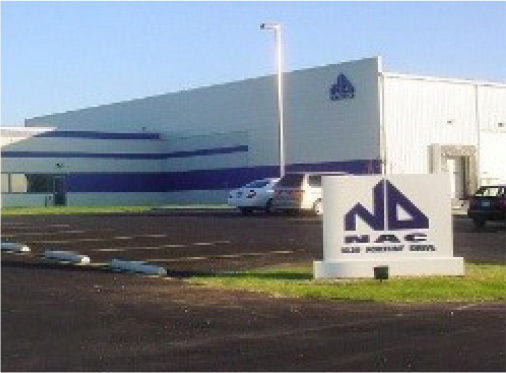 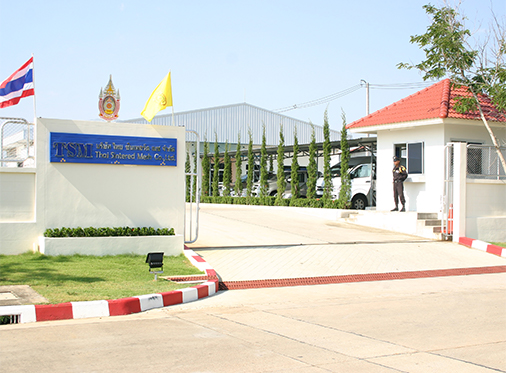 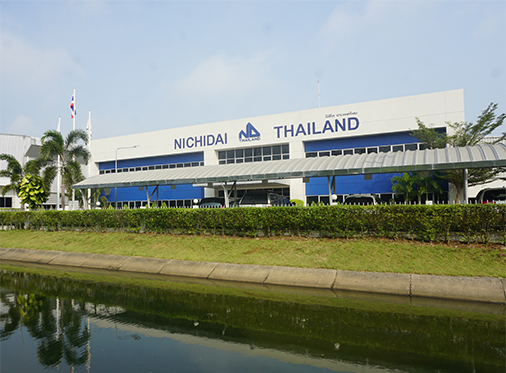 NICHIDAI’s “filter business” and “assembly business” compose its three core pillars together with its “net-shape business”. These two businesses are also the fruits of NICHIDAI’s continuous efforts based on its spirit.
First of all, the filter business has actually a long history of more than 40 years. In 1970s, NICHIDAI started its own research and development programs for filters to develop its “second pillar”. At that time, the company developed its technology using a furnace for heat treatment in the production of dies instead of a vacuum furnace and then started the sales of filters in a small scale from 1974. In 1980, NICHIDAI’s filters were selected by the Space Institute of the University of Tokyo (called JAXA today) as the parts for their rocket. Those filters were adopted for the project to produce a rocket using only parts and technologies manufactured and developed in Japan. NICHIDAI’s filters have been selected for a wide variety of industrial fields since then. As the company has a large proportion of automobile-related products in its product line, its filter business may play a key role in the expansion of its contribution to society.
On the other hand, the assembly business is a new field where NICHIDAI entered in 2000s with its eyes toward the potential of turbocharger. While the company decided to start its research and development with supports from final assemblers, as there were many technologies it did not know, it not only looked into the technical literature but also touched real products in the field of its production partner and established its technology after many struggles. This was accomplished by much trial and error in view of the acquisition of special processing technologies to meet requirements in new technical fields, the adoption of new characteristics of assemblies different from those in the company’s conventional production process, and the establishment of mass production system. NICHIDAI’s engineers never lost their strong passion to definitely succeed in their new business. 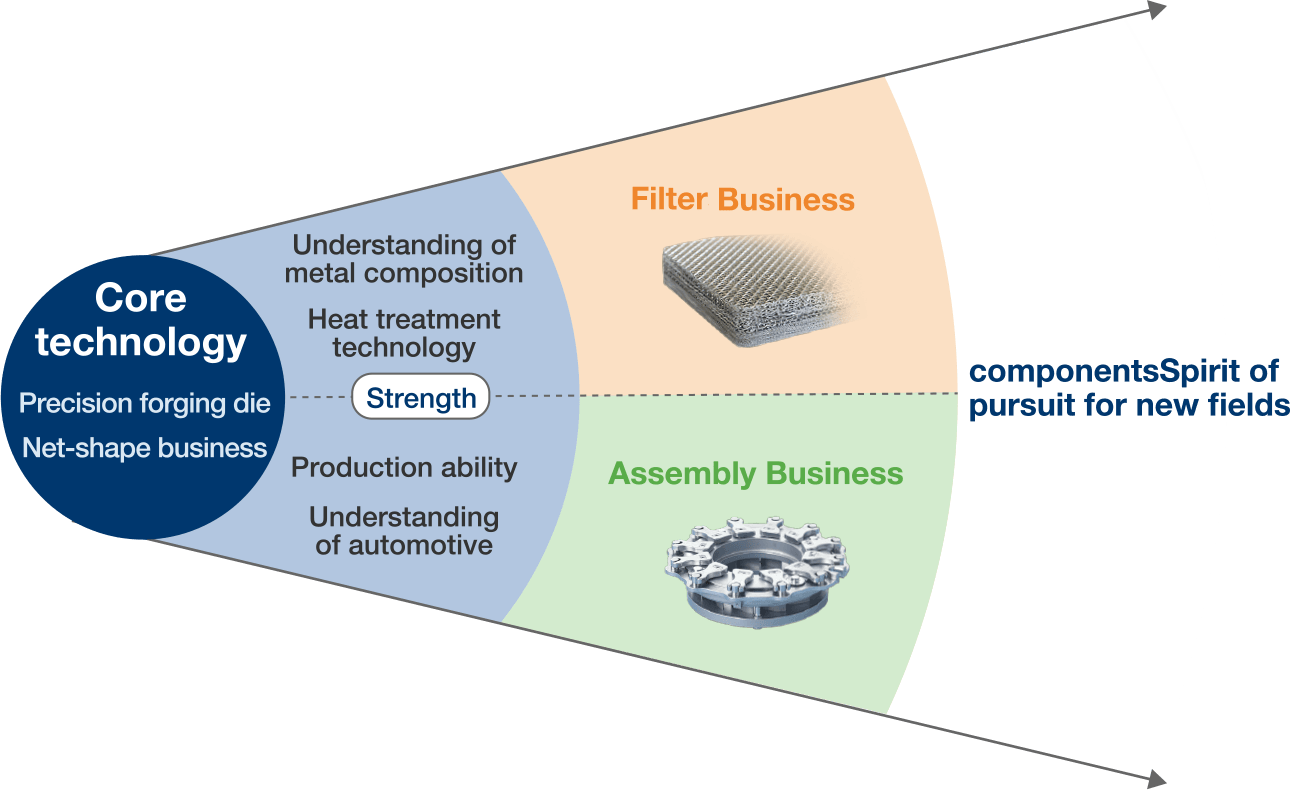 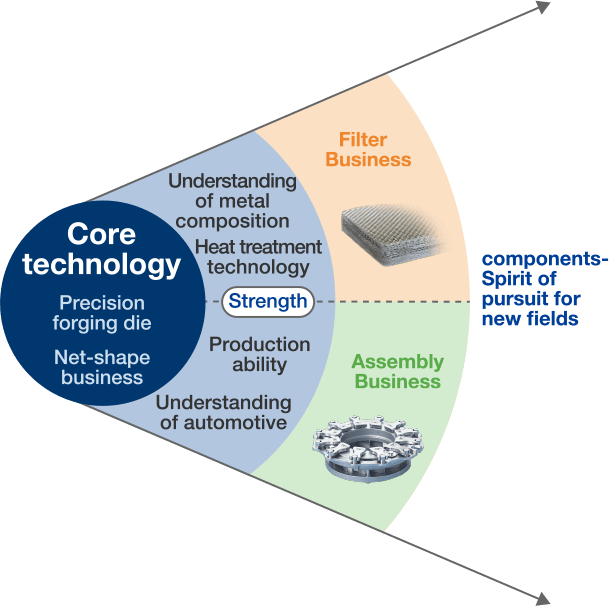